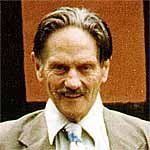 Beowulf Cooper recognised that the native bee, Apis mellifera mellifera (the Dark European Honeybee) was very much alive and kicking in spite of Brother Adam and others pronouncement of its demise as long ago as 1920.

Beo, as he was known to his friends, was an entomologist employed by the Ministry of Agriculture Fisheries and Food. He travelled widely in his work, observing bees and realising the damage beekeepers did by importing foreign sub-species of honey bees. He was a lone voice among the leading beekeepers at first, but many came to recognise that the hybridisation caused by imports was a great barrier to improving bees, as one cannot breed true from hybrids. Many saw his policies of using purebred Apis mellifera mellifera bees and his condemnation of hybrids, as a direct challenge to those of Brother Adam, whose life time work had been to produce a hybrid bee, known as the Buckfast bee. Not only that, but the declaration by Beo that the native bee was still here, flew in the face of Brother Adam’s announcement that the native bee in Britain had been wiped out by Isle of Wight disease. Recent research by scientists using mitochondrial DNA analysis has confirmed widespread existence of A. m. mellifera in the these Islands.The trend was set by Beo to publish booklets aimed at informing ordinary beekeepers on management of colonies. This continued after Beo’s death. One of the first books published after his death was the ‘Honeybees of the British Isles’. This book was the result of excellent editorship by Philip Denwood using the vast amount of notes left by Beo. This sets out the management techniques developed by Beo based on observation and recording, and contains a wealth of information on many aspects of the craft that is rarely mentioned in other publications.Beo Cooper died suddenly in 1982, but he left behind an organisation that has continued with policies formed at its inception. As BIBBA attracted members from many different countries it was decided in 1997 to change the name again to Bee Improvement and Bee Breeders Association to reflect the wider sphere of membership. Similar organisations have since sprung up around Europe, and co-operation between them has resulted in International Black Bee Conferences, The first was held in 1996 in Norway, the second in Austria in 1997, and the 3rd which BIBBA hosted in the first week-end of September 1998 at Askham Bryan College, York.This wider aspect of involvement with other bodies has extended to Universities, and BIBBA has used these contacts to good effect. York University carried out morphometry work on many samples of bees collected in Yorkshire and Wales to find out the locations of areas that had populations of Apis mellifera mellifera bees.

Sheffield University developed a Laboratory of Apiculture and Social Insects, headed at that time by Dr. Francis Ratnieks.  BIBBA is involved in several ways with some of the work being carried out there, and provides regular financial support to help with research in bee breeding.

BIBBA has received funding from several charitable trusts, and this has helped in carrying out research in trying to find Varroa resistance in A. m. mellifera colonies through hygienic and grooming behaviour… Already, progress in this is evident, which has given us encouragement to re-double our efforts in this work.

Co-operation is advocated for the formation of groups of beekeepers working together on breeding programmes. It is possible to improve their local black bees by selecting for the characters of docility and productivity, for example. The basis for this is in good record keeping of observations made during inspections. Many have demonstrated how effective this can be in bringing about a remarkable improvement in strains of bees. Perhaps the most outstanding example is that of the Galtee group in Tipperary, where in its first 5 years had mono-strained a vast area with A. m. mellifera starting from one mating apiary belonging to Micheál Mac Giolla Coda. To see these bees being manipulated without veils or gloves, and to realise this has been done in such a short time, speaks volumes for the work of these beekeepers and the policies that BIBBA advocate.

Beekeepers have been helped by the publication of books and leaflets giving information on a range of topics relating to bee breeding, and today there is a respectable list of publications including this BIBBA web site.