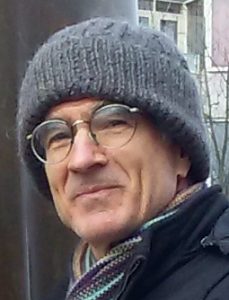 I'm a retired FE teacher, have kept bees since 1996 with at present some 30 colonies in several apiaries, plus 20 hives in two apiaries in the Tiverton area as part of an independent association - Mid-Devon BEES - that a few of us have started three years ago, teaching beginners and others, with a bias toward conservation and the environment, rearing our own queens from black bees.

Why do the bees rear so many drones?

This piece aims to explain:

“Drones in their season seem necessary to the working spirit. Experiments in eliminating all drones have not proved profitable, for the Hive Mind is not happy, possibly not complete, from May until August, unless big brothers are about.”(H.J. Wadey)

The question of the large number of ‘useless’ drones is often raised and occasionally answered by saying that the bees must know what they are doing, even if we don’t always understand it. However much we know, there is always more that we don’t. Like most organisms in nature, the bees live close to the brink; they have no safety net to fall back on, and can afford no luxury; they must have a compelling reason to invest so much capital in their drones.

One may have great sympathy with this sort of reply, and yet it skirts around the question and leaves it unanswered: a drone can neither forage nor feed larvae nor the queen (indeed, it can hardly even feed itself); it cannot defend the colony; secrete wax and build comb; bring in water and fan for cooling; clean the cells or pull out infected larvae… the list of a drone’s incompetencies is long - so why do the bees produce them in such enormous numbers?

Some professionals regard the drones as largely useless and a liability: "Drones are cumbersome and noisy and they are in the way of the workers" (C.P. Dadant). Most beekeepers, intentionally or unknowingly, limit their numbers by the use of full sheets of the standard worker-size-cell foundation, which limits the areas where drone cells can be built to the margins of the frames. Although drone foundation is available, it is rarely used by most. Since the advent of wired foundation, only the exceptional practitioner wires his or her own frames and therefore has the option of using just a strip of foundation at the top of the frame, embedded in the top wire (see photo below) - a method that frees the bees to design their own nest and rear as many drones as they wish, where they wish. 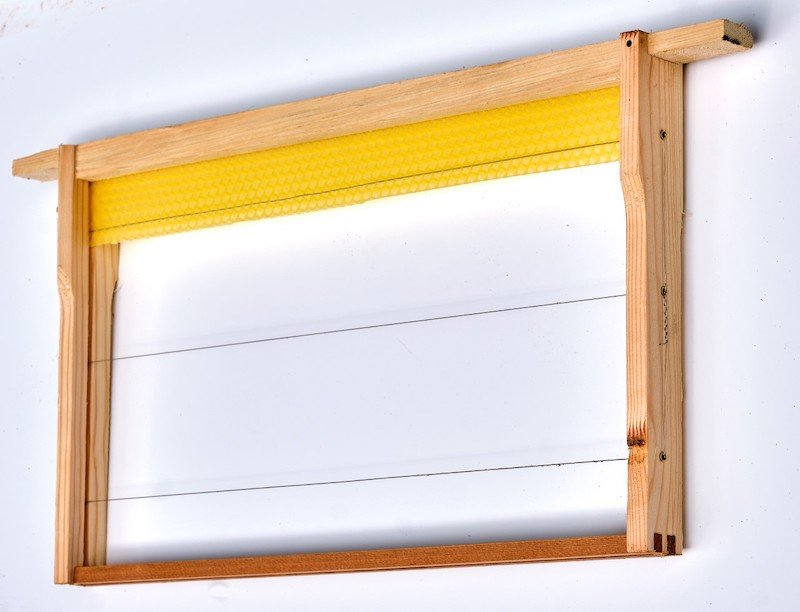 This frame is wired by hand without the use of nails. The wiring down the hidden side of the left-hand sidebar looks identical to what you see on the right. (Photo by Michael Cane of Huntsham, Devon)

It is estimated that about 10% of the brood reared in a feral colony of bees are drones, and they are expensive - special cells have to be constructed in which to rear them, they take space and need to be ‘spoon-fed’, first as larvae, and then as adults too, throughout their life. If we assume for simplicity that a strong colony produces 50,000 bees during a season, (a sure underestimate), then it apparently invests in at least 5,000 drones*. How many of these fulfil the sacred duty for which they are known to be required, that of inseminating a queen? If we assume that a colony produces on average 2.5 swarms in a season**, and therefore 2.5 virgin queens to be mated - and if we, again for simplicity, take it that a queen will mate with say twelve drones on average, then it follows that, on average, only some 30 drones from a typical colony give up their lives in mating, less than one percent of the 5,000! We must wonder what the other 99% plus do for a living.

In the spring the bees produce them in their thousands, and in the autumn their younger sisters have yet another chore to add to their multi-tasking - that of evicting those useless males, who have only survived the season because they were not good enough to mate! First depriving them of food, the workers then drag the poor things out and dump them unceremoniously in the grass. How unkind, and moreover, how apparently wasteful! (The human male is luckier - it is, in most cases, tolerated through the winter, probably only because men cannot so quickly be reared come spring when the grass needs cutting...)

It does appear to be the case that the drones, in fact, do not fulfil any as yet unfathomed function within the hive, and are therefore ‘useless’ in that sense. However, the bees are forced by the logic of evolution to rear as many drones as they can possibly manage short of bankrupting the colony, by the fact that queens mate randomly in drone congregations. In this free-for-all sex orgy in the sky, the probability of a drone from a given colony reaching a queen, is a simple function of the number of drones from that colony being present in the air at that point in space and time.

To understand this, imagine that in the long course of the evolution of the honey bee, a mutation were to arise in some colony that favoured the production of many drones. That colony would then naturally produce many drones. The genes that carry that mutation, which we can call the ‘many-drones’ genes, would be carried by those drones (which are, almost but not quite, genetically identical to their mother queen), and those drones being numerous, the chances of one or more of them mating with any queen that happened by a congregation would therefore be increased, thus passing those ‘many-drones’ genes on to the next generation. That new generation would then produce many drones again and those, having the advantage of numbers, would once again dominate the mating and ensure the successful propagation of those genes, and so on. It is a self-reinforcing process - a lovely example of what a logician would call a ‘positive feedback loop’.

Conversely, just for the sake of argument, if a mutation were to arise in some colony that favoured the production of very few drones, that would lead, accordingly, to that colony producing few drones, and those drones, carrying the ‘few-drones’ genes, being few in number, could not compete in probability terms in the chase after queens; such ‘few-drones’ genes would therefore tend not to be passed on and would sink into oblivion over time.

Hence we see that the ‘many-drones’ genes are bound to dominate over evolutionary time, and the bees are ‘compelled’ by those genes to produce lots of drones, and to pamper them and look after them really well so that they are strong and virile and can outdo the others in the chase after queens, which is the competition to pass on the genes of the queen that has produced them. We say that the bees love their drones, but it’s that selfish gene again.

The success of the bees over millions of years has depended and still does on many other successful genes, which help them to adapt to the different environments they inhabit and to stand up to all the challenges that nature throws at them all the time, (including, of late, that of dealing with us humans with our ‘agriculture’), but the ‘many-drones’ genes are essential for all the other beneficial genes to be carried forward and not be lost. A healthy and vigorous colony manifests a combination of many advantageous traits and being strong, it also produces many drones. These then tend to dominate the mating by sheer force of numbers and therefore propagate their successful genes far and wide, in a kind of apian ‘sharing of best practice’.

We know that an individual bee will always put the interest of the colony before its own, in the way it over-works itself to death in the summer to secure the coming winter's provisions, and in sacrificing itself when stinging an intruder. But here is an instance where the whole colony as a super-organism puts the interest of the species as a whole ahead of its own. The expenditure on drones apparently does little in the short term for the colony that produces them, but is a vital investment for the long-term survival and prosperity of the honey bee as a species.

Evolution is ever continuing and drones are its agents.

* Tom Seeley in his book ‘The Lives of Bees’ (chapter 7 p. 158 - 9) estimates that a colony living in the wild produces on average about 7500 drones in a season. Given the short lifespan of the summer bees, a colony that at the height of the season has 40 or 50 thousand bees must produce a much greater number through the season, perhaps 70 or 80 thousand.