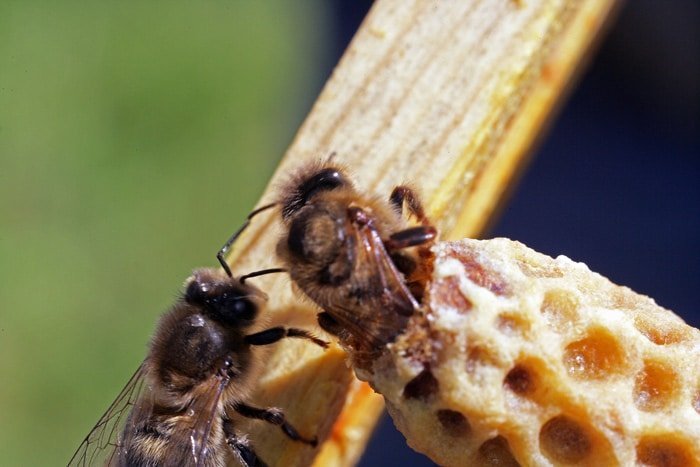 There are so many techniques of queen rearing, and so much has been written about them, that it may seem unwise to add any more. Studying too many methods can be a source of much confusion and leave one overwhelmed and unsure of how to proceed.

Like most things in beekeeping, the best way to learn is to have a go, find out what works or does not work, and then try to refine or improve the technique over time.

Although there is an enormous array of information available on queen rearing, it is appropriate to include a few techniques that beekeepers have found work well for them, from the simplest methods to the more advanced ones.

There are a few simple rules to rearing good queens and these should be adhered to regardless of which method one uses. It is no good getting the genetics right if the queens are not well reared, as their performance may be severely impaired.

There are numerous ways of producing queen cells with this method. One method is described below.

Queen Rearing Method without grafting (or finding the queen) 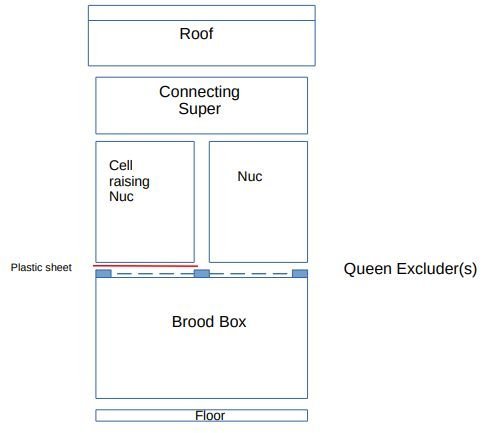 This queen rearing method does not require the queen to be found or larvae to be grafted. If the bees do not raise any queen cells nothing is lost, the colony remains queen right and you just need to have another go.

The Queenright Method of Queen Rearing

The ‘queen-right method’ is advocated by the NBU and an article explaining the method can be found on the BeeBase website (see Link at end of this article) It seems too simple to be true, only a queen excluder separating the queen from the reared cells, but it works.

The main advantages of the method are that it is a more spontaneous than some, not much advanced preparation is needed and, after the initial set-up, requires little work but, most importantly, the temper of the colony is not tested as it is queenright throughout. The colony can be set up one day and queen-rearing can begin the next day, or even set up in the morning and grafted cells added in the afternoon.

It is usually done with grafted larvae but works equally well with a Jenter or Cupkit larval transfer system, but this requires more planning and preparation. Like any method, results can vary a lot, but it is not uncommon to get around 18 successes out of 20.

Any type of hive can be used that allows for two brood boxes to be used on top of each other. National hives are ideal for this method of queen rearing. The designated queen rearing colony (not necessarily the same as the ‘breeder queen’) is built up in the spring, perhaps by stimulative feeding, and when nearly occupying the whole brood box, a second brood box is added, without a queen excluder. One or two frames of brood are raised into the top box to get the bees immediately working in two boxes and a couple of empty frames of comb or foundation put below as replacements.

Feeding is particularly important during spells of poor weather, or if no flow is expected. If the colony is not strong enough, or the weather is poor, with little coming into the hive, the numbers and quality of cells will be reduced. A strong and well-fed colony will complete better-quality cells and more of them. A frame feeder is ideal for use with this method of queen rearing. It allows a super of foundation to be put on top above the excluder for bees to occupy themselves with drawing out extra comb, rather than building brace comb or ‘webbing’ around the queen cells together.

A grafting frame with two rows of 10 plastic queen cups, as used in the Cupkit method, or JZBZ cups, can be used for holding the transferred young larvae.

When the colony is strong enough, that is, it has filled two brood boxes with bees, then I can set up the hive for rearing. As with many things in beekeeping it is easier with two people as one can be assigned to each brood box. The two brood boxes are separated to look for the queen whilst, at the same time, looking for suitable frames to surround the grafts when introduced. What is required in the top box is the frame feeder plus a frame or two of stores, a frame or two of pollen and a frame or two of open brood to attract the nurse bees, and a gap in the middle of these, for the grafting frame. This will encourage well-fed nurse bees to congregate around the grafts so that when introduced there will be plenty of bees to immediately tend to the grafts.

When the queen has been found, she could be temporarily caged, and when re-assembling placed in the bottom box and confined on 11 frames in this box with the queen excluder. The top box will then be placed above the excluder with the selected frames. A gap for the ‘graft frame’ is left between a frame containing pollen and some open brood. A super can be added, perhaps with foundation, at this point.

The day after setting up the colony to receive the grafts (or it could be the afternoon if hive is prepared in the morning), we go to the colony of our selected ‘breeder queen’ and select a frame with very young larvae suitable for grafting. This may be in a different apiary so we may graft on the spot and transport the grafted larvae, wrapped in a damp towel, to the Tearing colony, or take to Rearing colony and graft there. To graft, our preference is to use a Chinese grafting tool which makes depositing the larvae easy. Good eyesight and a steady hand are the main requirements, and the ability to select day old larvae. Larvae all receive the same diet up to 48 hours old so this allows some leeway. We have also experimented with putting new cups, or primed cups (that is ones that have been in the hive for a least a day), in every other position on the grafting bar, and found that it makes no difference to acceptance.

At some point in the following days, we will check for acceptance, to satisfy our curiosity, and so we know how many homes need to be found. The crucial date is 10 days after grafting, or for calculation, one week and 3 days after grafting, when the cells are ready for removal. This is Day 14 from when the egg was laid; we often find that some hatch on Day 15, so timing is crucial.

The ripe queen cells can be put straight into nucs or mini-nucs, or into an incubator for hatching and then virgin queens introduced. If introducing virgin queens into a nuc we like to introduce them, at least, one day after the previous queen has been removed. We use a piece of marshmallow to block the cage and slow down the release of the queen.

Conclusion, and what can go wrong

The queenright method of queen rearing is not a fool proof system that is guaranteed to work every time, but it seems to be relatively stress-free for the bees and the same colony can be used several times for queen rearing during the season. After the ripe queen cells have been taken out, the queen excluder should be removed allowing the queen to have access to both brood boxes again, unless immediately inserting another graft, in which case the frames may need re-arranging, as before.

Alternatively, a week or two later the colony can be set up again for queen rearing, as described earlier under ‘Set-up Day’. By having a series of colonies, in this condition, we can achieve a mini-production line for raising new queens.

There is no guarantee how many cells they rear but we are happy with 15-18 in a batch. If fewer, say 8-12 we are also happy as it is a lot better than zero, and it is a relief not to have so many homes to find. Below this number we consider a bit of a failure, but it is not always easy to guess why. The weather may have gone off or the nectar flow reduced (as often happens in June), or the rearing colony may be too weak.

The ‘burying’ of queen cells in brace comb can be a problem and once this happens it seems some of the cells may get neglected. It is still possible to cut the cells out but sometimes they do not all hatch. Giving the bees some comb to draw out helps to prevent this problem and that is why I often add a super with at least some foundation.

The classic mistake is to fail to take cells out on Day 14. By the time you get there they have all hatched and killed each other.