Record-keeping: the selection of local stock

The honey bee colonies in our area should be viewed as our resources for selection and improvement. We may only be responsible for a handful of those colonies so there is a great incentive to co-operate and work with other beekeepers in the area to increase our sphere of influence. By refraining from the use of imported stock we are already on the way to developing a local strain, shaped by ‘natural selection’ and also by ‘artificial selection’ or selection by the beekeeper.

The process of improvement depends on propagating the genes of the best colonies and replacing, or removing from the area, the queens of the worst colonies, thus reducing the genetic influence of these genes in the population. This process must be carried out with an awareness of the importance of maintaining genetic diversity within the population. The honey bee, with its system of the queen mating with numerous drones, is well-adapted to avoiding the problems of ‘inbreeding’ and maintaining genetic diversity.

To allow us to select the most desirable queens to rear a new generation of queens from, and to replace, or remove from the area, undesirable queens, we need to use a system of record-keeping that allows us, over time, to build up a picture of the qualities of each queen. Beekeepers are often quite used to keeping records for the general management of their colonies but perhaps less used to record-keeping for assessing the qualities of their bees. There is no single correct way to do this task and beekeepers may wish to devise their own system. The system should be quick and easy to use but provide useful and relevant data that shows, at a glance, the relative qualities of each queen.

Some may like to use one card for management and one for assessing their qualities, while others may wish to combine the two and have everything on one card. In this NatBIP Guide we have one or more examples which can be downloaded and printed out for use by participants. There will also be the option for beekeepers to modify the ‘standard’ card to suit variations that an individual, or group, may prefer.

What qualities to assess

The first thing an individual or a group must decide is what qualities to select for. The less qualities we wish to maintain or improve, the more chance we have of making progress and achieving our aim. The National Bee Improvement Programme (NatBIP) does not dictate what qualities to select or how to assess those qualities. NatBIP will make suggestions of tried and tested methods that have been shown to produce results, but individuals and groups will be free to make their own decisions. Nothing is set in stone and things can, and will, be modified over time according to beekeepers’ experience. In the system described, using the suggested record card, the following qualities are selected:

Individuals, or groups, around the country may prefer a different set of qualities and are free to adjust accordingly. What follows are the reasons for choosing these qualities, and how we assess each colony for them.

Various systems of scoring have been tried over the years and the favourites, and easiest to use, are a 1 to 5 system (5 being the top mark) or a -2 to +2 system with 0 representing a neutral point.

The 1 to 5 system is the one described in the following text. 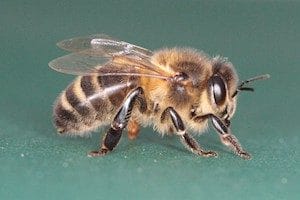 Most of us will be starting with randomly hybridised bees, that is bees that are a mixture of various sub-species. This is the result of over 150 years of importing bees that originated in different climatic zones around Europe. Some people view importing bees as a positive, citing genetic diversity, docility and prolificacy as welcome qualities, but the fact is that the docility cannot be maintained over succeeding generations, and bees from quite different geographical areas have a genetic make-up not suited to our particular environmental and climatic conditions.

Perhaps, more importantly, this continual mixing of the sub-species produces bees which do not breed true, making selection and improvement more difficult, and therefore making progress in improving the quality of our stock becomes slower.

To get more consistency into our improvement programmes and to speed up progress, it helps if we select within a strain or sub-species. Individuals or groups can make their own decisions about the best way forward, in this respect, but without the constant input of new genes from imported bees, and with the effect of natural and artificial selection, local populations of bees will gradually evolve to form a strain, that is a more homogenous population that is more likely to breed true.

There is a belief that the native strain, Apis mellifera mellifera, is most likely to dominate in the long term and many involved in bee improvement will actively encourage this tendency by selecting for this strain. The simplest way to do this is to this is to assess the appearance of the worker bees in a colony on a 1 to 5 scale; 5 being given for a colony whose workers are uniform and native in appearance.

Some may question whether assessing a quality on their appearance is in fact a useful and reliable method. Other techniques that can be used include ‘morphometry’ and ‘DNA analysis’. Assessment by visual appearance remains the simplest and cheapest method, and DNA analysis seems to validate its usefulness in achieving a more consistent strain of bee.

A good temperament is the quality that beekeepers commonly cite as the most important quality that they want in their bees. Apart from actual ‘survival’, there is no doubt of its importance for the pleasure of beekeeping and for the safety of the public.

The temperament of a colony should be assessed at each inspection. A 1 to 5 scale works well, making assessment easy and accurate. One should ask if the colony is good or bad to work with. If good they can be given a mark of 4 or 5, depending on how good. If difficult, or unpleasant, to handle we can give them a mark of 1 or 2 depending on whether we rate them bad or very bad, or a mark of 3 if neither particularly good nor bad.

There may be considerable variation on different occasions over the season, often depending on the weather, available nectar, or the state of play regarding swarming, for example, but quite quickly a picture is built up of which colonies are pleasant to work with, or vice versa.

Breeder queens will normally be selected from those that head colonies showing exceptional docility. 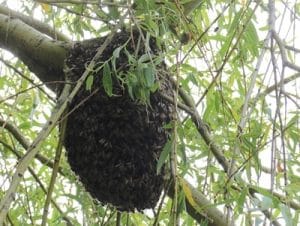 Whilst swarming is a natural part of the bee’s life-cycle, there can be considerable variation in the propensity to swarm between different colonies, as well as variation between different sub-species. Swarming is the bees’ natural method of reproduction, a means to increasing the number of colonies, and in the wild is essential to the survival of the species. Swarming is also a risky strategy resulting in a colony headed by an old queen and one or more colonies with young queens which must successfully mate and start laying.

From the beekeeper’s point of view, a colony which swarms, apart from the associated risks to the swarm and the parent colony, will result in a great reduction in honey production. Also, in a crowded environment, swarming can be a nuisance factor with the public. For these reasons, beekeepers normally prefer bees which swarm less frequently. Although swarm cells generally produce good queens, being the result of flourishing colonies producing well-fed cells, repeated use of such cells may result in bees which tend to swarm more than the average.

Some bees tend to supersede rather than swarm. This is a process where the colony produces a replacement queen without the risks involved in swarming and is regarded by beekeepers as a favourable quality. To produce bees with a lower propensity for swarming, and perhaps a greater tendency to supersede, we can assess swarming propensity on a 1 to 5 scale. A colony is only assessed, or given a mark, if, and when, preparations for swarming are observed. Thus, if the production of queen cells, beyond the egg stage, is observed, the queen will be rated accordingly.

The usual methods of swarm control should be carried out by the beekeeper.

The marking system could be as follows: 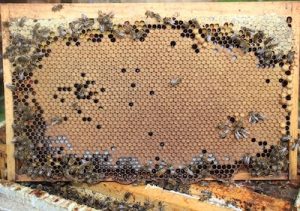 Over-wintering is a once only assessment taken on the first full inspection of the year usually in April and it is a measure of the relative strength of colonies as the
spring gets going. An average strength colony would be given a mark of 3, strong or very strong 4 or 5, and weak or very weak 2 or 1. There is no definitive size, seasons will vary, it is just a comparison between colonies.

Many beekeepers like their colonies to be strong in the spring to benefit from oil-seed rape crops and other spring flows early in the season. This is a trait that could be selected for.

Health and Brood pattern are usually only assessed if something of note is spotted, for example, an extra good brood pattern with large quantities of healthy brood could be given a 4 or 5. Any health issues, of adult bee or brood could be noted and may warrant a mark of 2 or 1. For example, the presence of chalk brood may warrant giving a mark of 2 or 1. 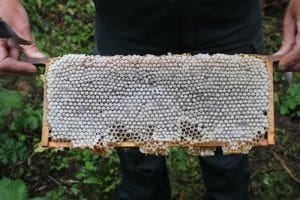 We are all operating under different conditions, some areas are more productive than others and seasons vary tremendously. The best way to make ‘honey yields’
more meaningful is by converting them into ‘relative honey yields’ (RHY), that is a colony’s honey yield as compared to the apiary average. To calculate the apiary
average, we add up the yields of all the honey producing colonies and divide by the number of those colonies. An individual colony’s yield can then be divided by the apiary average. The resulting figure gives a ratio for each colony, as compared to the average.

Many variables affect a colony’s ability to produce a crop of honey. It may be difficult to know which are the most important factors affecting this but by converting the figures for honey production into a relative honey yield (RHY) we can show that a colony is productive, even if we do not know all the reasons why.

Good and bad colonies as resources

By keeping accurate records, we can work out which colonies, or queens, we should be using for producing more queens, or for drone production, for example, and which should be disposed of in some way. All our colonies are our assets to be used in the most suitable way, so anything of poor quality that we would not want to pass genes on to future generations can be dealt with in various ways. It could be re-queened or moved out of the ‘mating area’ for use as a honey producer or built up on a double brood box for splitting into nucs. It then becomes a useful resource for making more colonies.