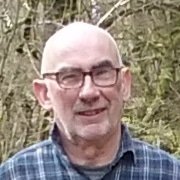 Peter Jenkins has kept bees since the age of 14, a period of over 50 years. He now keeps around 40 colonies of near native bees in and around the marginal areas of Cardiganshire. Spending most of his working life as a Chartered Engineer working around the world on marine and naval projects has meant that, for many years, he had little time for regular 10 day hive inspections as advised in text books. Nevertheless he has harvested at least average crops of honey year on year using bees improved over lifetime by his father, a process he is now continuing following his father’s death in 2009