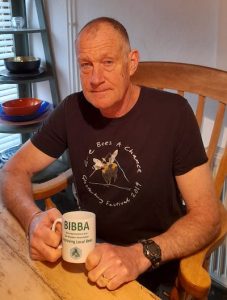 Nick was in a ‘former life’ a Royal Marines Officer for 32 years. Nick first started keeping bees in the early 90’s having between 2 and 5 colonies for many years. For most of that time he bred his own queens, quickly realising that there had to be a better way rather than importing queens.

Nick chaired the Tavistock Branch of the Devon BKA for a few years and was also the Branch apiary manager.

In 2009, whilst still in Devon, he joined BipCo (Bee Improvement Programme for Cornwall), which was under the Chairmanship of Jo Widdicombe. At this time Nick became very interested in bee improvement, realising that he had in fact been doing the same, with his own bees for a number of years.

In 2011 Nick retired from the Royal Marines and became a full time beekeeper. He now runs about 30 colonies, and helps with the management of a number of BipCo mating apiaries. He is also Chairman of BipCo and one of the Directors of B4, (Bring Back Black Bees), which is a community interest company looking at conserving the remnant populations of Amm in Cornwall.