The Galtee Bee Breeding Group was formed in the year 1991 with the object of conservation, study and improvement of the native strains of dark European Honeybee Apis mellifera mellifera in the Galtee/Vee valley and surrounding areas of South Tipperary.

In the first year we had only four members and increased our membership only very gradually during the early years. After the BIBBA Conference in our area in 1996 we decided to invite some more prominent and active Irish beekeepers to join us and we have continued this policy up to the present.

The Galtee/Vee valley is about 25 x 10 km and is situated between the mountain ranges of the Galtees and the Knockmealdowns. Midway in the centre of this valley we have established our breeding apiary and this is still the centre of our activities. A policy of displacement breeding has been adopted from the start and this we call our Dun Aonghusa system. The elimination of hybrids and other undesirable characteristics such as over-aggressiveness and excessive swarming was our primary objective.

We have made extensive use of morphometry to identify hybrids especially in the early stages. We are extremely lucky to have as a member of our group the eminent scientist Dr. Jacob Kahn who is currently engaged in ongoing studies into the morphometric characters of our native Irish bees.

GBBG has devised a programme of evaluation, recording, culling and selection that has proved very effective over the years. Each year selected breeder queens are brought back to the breeding apiary. These are used for the production of queens and drones in the following year. we use instrumental insemination to produce various combinations from selected queens and drones each year and these are distributed to group members who keep records for testing and evaluation. Group members are entitled to two breeder queens from our breeding apiary each year at a nominal price. We encourage all members to keep records and submit summary returns to one of our members at the end of each year. This information is being used to establish and update our group stud book.

An offshoot of our activities is the fact that a number of smaller bee improvement groups are in the process of being established in other places throughout the country and we hope that this trend will continue.

The Department of Agriculture in the Republic of Ireland has co-operated with us so far by maintaining a ban on the importation of bees and queens. Unfortunately the Northern Ireland Ministry of Agriculture has seen fit in recent years to allow the importation of queen bees under licence. These queens are imported from different part of the world and are of a variety of races. If this trend continues it can have a deleterious effect on the purity of our native bee which is the race that predominates throughout the island of Ireland. 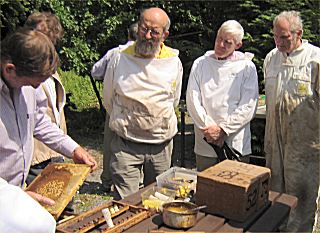 With our cool, damp, oceanic climate we believe that the native Irish strains of Dark European Bee are by far the most suitable for our climate. Unfortunately no effort was made to improve our bees until the formation of GBBG in 1991. Even in that comparatively short time our simple breeding policy has resulted in improvements beyond our wildest dreams. We have identified docile strains that can be manipulated with the minimum of protective clothing and even in shorts and tee shirt in fine weather.

Our next major objective is the reduction in swarming which is an important economic factor in beekeeping. We had a significant breakthrough at the end of the current season when we identified a number of colonies that had come through the past two swarmy seasons without attempting to swarm. The ancestors of these queens had been selected for the combined traits of supersedure, longevity, docility and productivity.

GBBG holds a variety of activities throughout the year such as outdoor demonstrations on colony evaluation and recording, queen rearing workshops, and a winter discussion and study group. There is an Annual General Meeting and we produce a quarterly newsletter known as “The Four Seasons – Ceithre Ráithe na Bliana”.