Countryfile – report on dark bee reserve on the Rame Peninsula


The prospect of Countryfile coming to the Rame Peninsula and doing a report on native bees was a cause for excitement and some trepidation. We are all used to incorrect reports in the press, wasps being labelled as bees and so on. We also know about the hours of filming that go on for two minutes of viewing, which can give totally the wrong impression.

I was quite pleased when I was asked to be interviewed and to have my bees filmed as I thought it would give me the chance to get the ‘right’ message across, not necessarily just what the BBC wanted. I felt quite re-assured when the producer and researcher visited a week before the filming. I was able to explain what the native bee is, why we like it and how we go about selection and improvement. The story they wanted to portray was not quite the same as how I would have done it. I explained that I was keen to get my message across and we reached agreement on what questions I was to be asked. I showed them the apiary where the filming was to be done; it is in a scenic spot; the hives look quite smart and the bees are virtually all ‘black’ and mostly docile. Things looked quite promising.

On the day of the filming I was told they would be with me at 3.00 which turned out to be 3.30. By the time they had finished filming Ellie making all the links for the programme it was 4.30. Then time for my interview which actually seemed to go quite well. I was able to explain a few points about using native bees and bee improvement. I got the ‘thumbs-up’ for explaining things well and everybody seemed pleased. 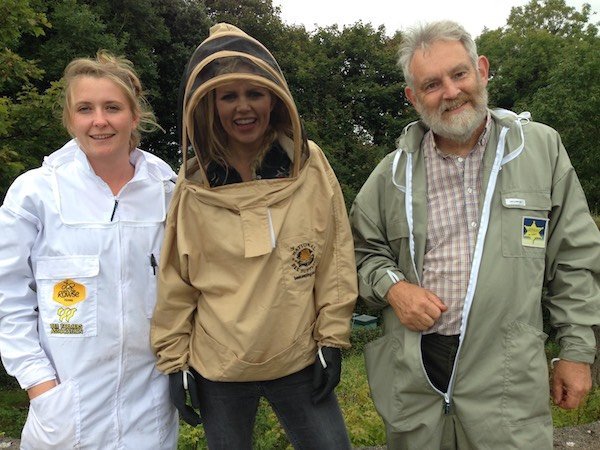 As we now know, most of the interesting bits got cut out and they just came back to their original storyline which included irrelevant facts like how long I had been beekeeping and how much honey I hope to produce. Most disappointing of all were the close-up shots of the bees which were interspersed throughout the programme. These were not my bees and clearly were not ‘black bees’. By the time they filmed my bees it was dark and overcast and the bees were not flying (and, to be honest, they were slightly ratty).

When we make up nucs we put a native queen with bees from an unwanted colony, usually non-native bees. The clip that was repeatedly shown may have been such a colony, from the Edgcumbe reserve. In time, the bees normally go darker as long as the queen has mated well. In my apiaries, I like to over-winter 12 colonies and in the spring the survivors will be reduced to the best 8. The surplus colonies will be moved from the area and used to supply bees for further nucs. The Edgcumbe reserve will be treated in a similar way so that anything which is not up to standard for any reason in the spring will be removed from the area and used for resources for any newly reared queens. In this way we make sure that as many colonies as possible, in the area, are putting out ‘good’ drones. The chances of good matings of any new queens produced are then as high as possible. This process is repeated year on year so developing a good strain in the area.

The other glaring error, of course, was the claim that it was Britain’s first ‘dark bee reserve’. We all know that that distinction goes to Andrew Abrahams and his bees on Colonsay. I was, as you can tell, a little disappointed by the report. Having said that it has been well received by many although it has left us open to a few pot-shots from those in the know.