Cornwall Bee Improvement and Bee Breeders Group was founded in 2002 to assist Cornwall beekeepers in their quest for bees that reduced varroa enough to control them to non-lethal levels. 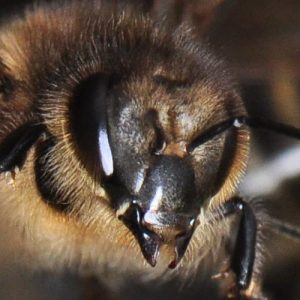 Bees use their mandibles to groom varroa
off each other, crush them or anaesthetise them and remove them.

So far, we have found several behaviours, most in the research literature, which lead to the removal or death of mites. Our inspiration was Alois Wallner who had attained a “Varroa Kill Factor” in the high 90%s in his Carniolan bees even before varroa arrived in the UK.

We have found the Cornish bee, with high A.m.m. genetic content, to be the best at the job and encourage our members to breed from the dark bee and examine them for damage to varroa, decapping and recapping and so on. Rodger Dewhurst has proposed that biting bees are more prone to attacking varroa.

We inspired and supported the foundation of the B4Project and we have had members on the Board of Directors since. We have been encouraged by the genetic results obtained by our collaboration with B4.

See www.cbibbg.co.uk for history and details.