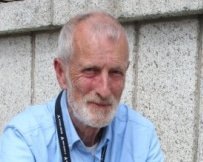 In 1976 I attended a beginners’ beekeeping course at the local Agricultural College. The course was run by the County Bee Instructor George Sommerville, an early member of BIBBA. I eventually purchased a hive & bees from a specialist in flea biology! The bees were excellent, although I did not realize this at the time. My interest in bees & beekeeping increased to total involvement. I obtained the BBKA Certificate in Apiculture under the guidance of Adrian Waring (also an early member of BIBBA), who had replaced George Sommerville as CBI.I joined the local BKA and was eventually elected to the executive committee. I served on the committee continuously for 22 years and held most posts of responsibility including President and Chairman (three times). I continue to tutor & mentor beginners.I joined BIBBA at about the same time (influenced by Claire & Adrian Waring) & became a member of the committee serving continuously for 20+ years. I took over as Membership Secretary from Albert Knight and, latterly, took on the roles of Secretary and Chairman and was responsible for the present Constitution & AGM Standing Orders. In 2012 I returned to the committee.When I retired from the committees, I was awarded Honorary Memberships of both NBKA and BIBBA.In 1992 I was elected on to the BBKA committee and served for six years and was involved in education (in particular, the publication of Bees in the Curriculum). In 2005 I was again elected on to the committee for one year and elected the following year for three years and again for another three years. During that time I was involved in the Education & Husbandry, Publicity & Promotions, Standing Orders and Constitution, Governance, Royal Show and Stoneleigh Shows committees. The latter was responsible for organising display gardens and live bee demonstrations at the Edible Garden Show at Stoneleigh and Gardeners’ World Live at the NEC at Birmingham (awarded RHS Best in Show two years running).
Awarded Apiculturae Maxime Se Dedit in 2014 and made Honorary Member in 2016.

I have exhibited successfully at local and national shows and have written a book on making mead and honey drinks (Good Health & Long Life published by Northern Bee Books). I have made a Country Tracks film produced by the BBC on making mead. I have acted as honey Judge.

I enjoy attending local & national shows, which enables me to meet the public and promote bees and beekeeping. I regularly get invited to give talks.

At present I manage 20+ colonies.