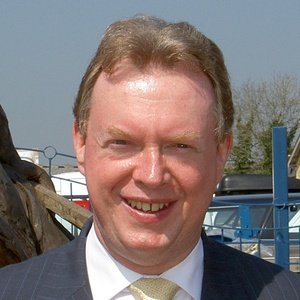 Why We Should All Get Behind It

You may have the same reaction that I did when I was invited to attend a World Bee Day Event held at the Conway Hall in Holborn, London in May 2019.  “World Bee Day, never heard of it”.  The Event was a joint initiative by the Slovenian Embassy and the Conway Hall. It was an excellent event with honey producers and beekeepers from across the World, all wanting to come together to promote a healthy and viable future for honey bees. Here in the UK, we haven’t paid much attention to what is becoming an important initative internationally.
So, what is it and how did it start?

Its purpose is to raise awareness of the importance of bees and beekeeping, inform the public of major beekeeping events around the World and celebrate World Bee Day. How did it start? Well, it came from beekeepers like us. The idea came from the Slovenian Beekeepers’ Association in 2014 and it was supported by the Slovenian Government, which began the process of getting it adopted by the United Nations. Some of you will know just how seriously beekeeping is taken in Slovenia, with an impressive range of Government support.

In 2015 the initiative was supported by Apimondia (see Press Release).  In 2017 after three years of persuasion and lobbying, the UN’s Economic and Financial Committee adopted a resolution proclaiming World Bee Day.
On 20 December 2017, the resolution was unanimously backed by the General Assembly of the United Nations in New York, thus designating the 20th May as World Bee Day. The initiative was supported by all UN States, while 115 countries also acted as co-sponsors, including major countries such as the USA, Canada, China, Russia, India, Brazil, Argentina, Australia, and all EU Member States (including the UK, which was then a member of the EU).

This really is an initiative that we should support here in the UK. Some people may dismiss it as a gimmick. However, in my view, anything that helps to raise awareness of the importance of honey bees within eco-systems and agriculture is worth supporting, especially in the context of wide-scale international support. Now that the Covid pandemic is coming to an end, I hope all UK beekeeping organisations will look at what they can do to support World Bee Day and how we can all work together to promote it. It certainly something that BIBBA will be looking at as part of its plans for its 2023 Programme. If you want more information, have a look at the World Bee Day Website. If you have any ideas, please get in touch. 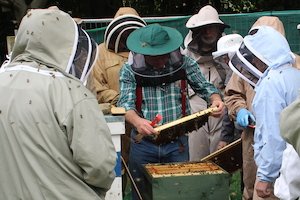 The BIBBA Education sub-committee are organising several bee improvement courses for this summer. They will feature one day hands-on practical and a video.
Further details can be found here:
https://bibba.com/improving-bees-by-raising-your-own-queens/ 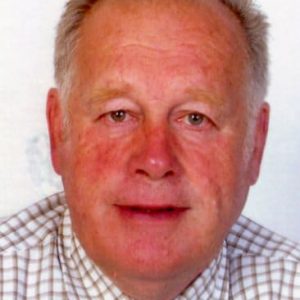 There have been many reports in the Beekeeping press about distant Drone assembly areas,  where beekeepers have used some form of lure to attracted drones to form a Comet formation as they would when pursuing a Virgin queen.
Reports of Apiary Vicinity mating behaviour are rarely reported. Beowulf A Cooper, in his book Honeybees of the British Isles, Chapter five, page 65 states:
It seems reasonable to assume that both assembly and non-assembly mating behaviour are normal and of frequent occurrence in the native and near-native strains of honeybee.
Page 66/67 goes on to describe various beekeeper observations of apiary vicinity mating taking place and Cooper concludes:
Despite the growing evidence and personal experience of drone assemblies in our Islands, therefore,  my faith in the existence of “apiary vicinity” mating remains undiminished.

I  have experienced what I consider to be apiary vicinity mating behaviour. The first occasion was approximately thirty years ago, I was working at a property in early June, in a small South Warwickshire village.   In the corner of a small pony paddock at the property were some beehives,  to the left and rear of the hives there was an hedge (app. 4/5 metres high)  to the South and West of the hives,  there was open space to the front (due East) and north. The beekeeper was a leave alone beekeeper who occasionally harvested some honey, and the bees, which were dark, had come from a First World war veteran so I assume they would be Native/near native.  On the day in question, the morning had been overcast and wet, at about 1pm the sun came out between the clouds and was quite warm at times.  At app. 1.45pm I decided to visit the hives to see if there was much activity.  As I approached the hives (approximately 6/7 metres from entrance)  I was startled by a sudden whoosh passing close to my left shoulder,  I quickly turned in the direction of the whooshing noise and saw a group of bees approx. 30cm wide disappearing over the top of the adjoining hedge in a Southwards direction. 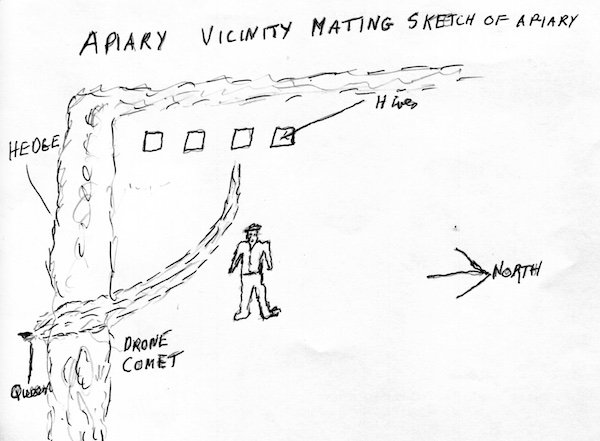 There was no doubt in my mind that I had just observed a drone Comet pursuing  a Virgin queen, and that before to long she would be caught by drones and mating would take place.  I can only assume that the Comet of drones had pursued the Queen from the hive entrance,  and what I had observed was Apiary Vicinity Mating in action.

The second occurrence was at my home apiary during the swarming season,  I had several hives in the garden, and the day in question bees were observed flying in close formation low and at speed from the hives as if chasing something,  I was not close enough on this occasion to definitely confirm that this was a drone comet, although on reflection I am convinced that it was.

I have several out apiaries and often in the Autumn,  (Sept/Oct) when I visit these apiaries it can be noticed that all hives are quite (marking time, due to very little nectar flow until the Ivy) except for one colony where there is excited activity for a while and then bees will settle down.  This in my opinion is when supersedure is taking place and virgins are on their mating flights.  At this time of year the weather does not permit Drone assemblies to form so Minor (Local assembly) mating or apiary Vicinity mating occurs.

The above topic is often overlooked and not covered in many of the bee books. Based on my own experiences my faith in the existence of “apiary vicinity” also remains undiminished,  and it probably goes a long way to explain why our native bee Apis mellifera mellifera  thrives and survives against all the odds in these British Isles.