This project came about from a chance conversation at a conference and Nick Bentham Green passed the opportunity to me as the most local committee member to run with. Essex and Suffolk Water run a number of reservoirs in East Anglia and the land around is managed by the local Wildlife trusts, in this case Essex Wildlife Trust. Essex and Suffolk Water had recently increased the water level of the reservoir by 5 meters submerging part of the land and they were looking for ways to offset this which is where BIBBA came in. The reintroduction of the native bee was attractive to them and to The Wildlife Trust.

Also BIBBA had in January run a Bee Improvement For All day in Colchester with Roger Patterson which was well attended and couldn’t have been more timely.

Abberton Reservoir is about 10 miles south of Colchester and the area is sparsely populated with people and importantly beekeepers so ideal for our purpose. 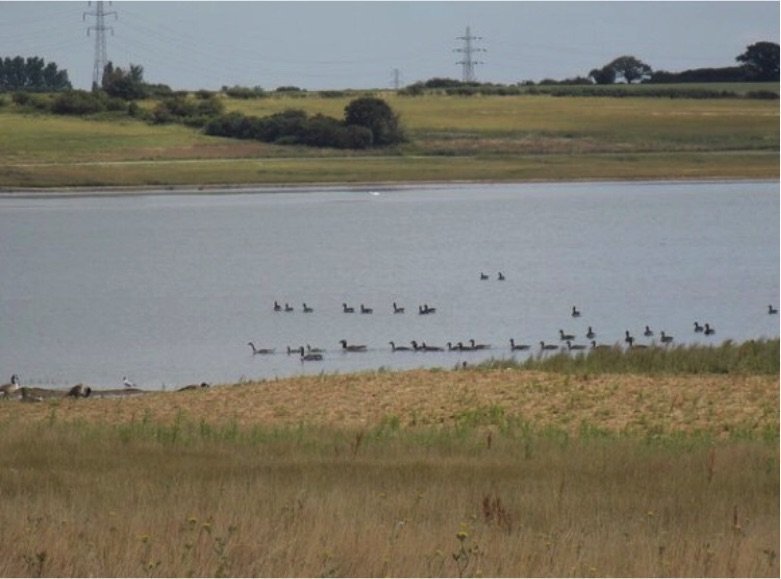 We first met back in March with Helen Jacobs of Essex and Suffolk Water, Jo Wray from Essex Wildlife Trust, Bill Tamblyn a local beekeeper, Tom Geddes from Colchester BKA and Russell Brand also from Colchester BKA. I expected a lot of difficult questions but was met with enthusiastic support. Colchester BKA had been looking for a teaching apiary site when three came along at once! One of the sites was just a mile away from our proposed native bee site and Bill kept bees within two miles. Rather than any objection to our bringing in new bees Tom, Russell and Bill were keen to have native stock at their apiaries and Bill volunteered to take on the day to day husbandry of the site.

The next step was to look at funding and Essex and Suffolk water were happy to contribute £800 and we applied for a BIBBA group grant of £150. I’m currently in the process of applying for a Tesco Groundworks grant which if we get onto the shortlist then customers vote on 3 shortlisted projects and they get either £1K, £2K or £4K voted on by shoppers. If we are successful this will accelerate what we are able to do.

The next challenge was to source some native bees. Pure stock is understandably rare (although BIBBA of course have plans in motion to change this), but I was able to get 3 native queens from Jo Widdecombe late in the season. I introduced the 3 queens into pre prepared nucs of my own mongrel bees (I left them in their cages for 3 days) and they were readily accepted. The colonies were then moved to Abberton and transferred into hives that Bill provided.

In August Essex and Suffolk Water did a press release which got the project into the local news. There were a number of articles in the local press and I was asked to be interviewed on Radio Essex. We were then approached by BBC and ITV regional news and were broadcast on both channels that evening! (The videos are available on the BIBBA Facebook page).

In October I was able to speak at a Colchester BKA meeting about the project and gain some more interest and importantly more beekeepers interested in being involved. I was able to recruit an additional 4 people to the cause.

The plan for the project is to rear 100 daughter queens next year and distribute to local beekeepers. We will prioritise those actively involved and those closest to the base site. Although these queens will be open mated their sons will be pure native and we will be able to flood the area with native drones. In subsequent years we will bring in new queens and we will gradually improve the purity of the stock and spread the area we influence genetically. This is something which will require a lot of work over 10+ years.

We would like to recruit more beekeepers to the project over the next few years and in addition to raising new queens also focus on teaching bee improvement and queen rearing. It is as important to have good tempered, healthy bees as much as native appearance.

Essex Wildlife Trust is a major landowner in Essex with 69 sites over 8,400 acres and there is a willingness to allow us access to these. Essex and Suffolk Water are keen to expand to their other sites also once we have established the first.

If anyone is interested in hosting a Bee Improvement for all day or a 2 day apiary based course with Roger please let me know. Also anyone interested in setting up a local group to improve their bees or looking for grants to do this I can help with applications to BIBBA and others.

Listen to an interview with Kevin Thorn