It seems we really are on to something with NatBIP – since its launch we now have over 3000 supporters. In addition, BIBBA has increased its membership by nearly fifty percent in the last 12 months. The feedback we have received from supporters and members has been amazing and we are so encouraged by your stories.

“I’m interested in beekeeping as a hobby, science, responsibility towards the protection of the environment and ecology. The aim to develop native (or at least near native) bee genetics and subsequent populations is absolutely sensible, but also critical in my opinion.  The various webinars/lectures more recently have made me commit to this goal.” Günther Mulder

We feel inspired and are continuing to spread the word - you can expect to see a lot more of NatBIP and BIBBA in the future.

So, as we prepare for the coming season, what do we need to have in place as far as NatBIP is concerned?

The first thing we should be thinking about is, are we going to work on our own or share the project with other like-minded beekeepers? There may be pros and cons to both approaches but, without a doubt, faster progress can be made if working within a Group, due to achieving greater influence, unless you happen to be a large-scale beekeeper whose bees can dominate your area.

You may be lucky enough to be near a larger scale beekeeper who is sympathetic to the NatBIP project. This could have big advantages, particularly when it comes to the mating of newly reared queens.

If you are interested in joining or developing a group to work together, get in contact with our Groups Secretary Brian Holdcroft – he can be reached on – and will aim to answer the questions you might have.

What qualities do I/we want in my/our bees?

Decide on the qualities that you want in your bees. This may involve discussion with others. The main thing is to decide what your priorities are, and perhaps what are secondary factors which can be worked on later. A few priority characteristics will allow your improvement programme to focus and make progress in actually achieving these goals.

Aside from ‘survival’, a lot of beekeepers would agree that they want bees that are pleasant to work with and a pleasure to handle. If nothing more than this is achieved, it is a step in the right direction.

Working with our ‘survivors’ rather than bringing in new replacement stock is the best way to develop a truly local strain, than is, one which does well in your area as it is ‘locally adapted’. 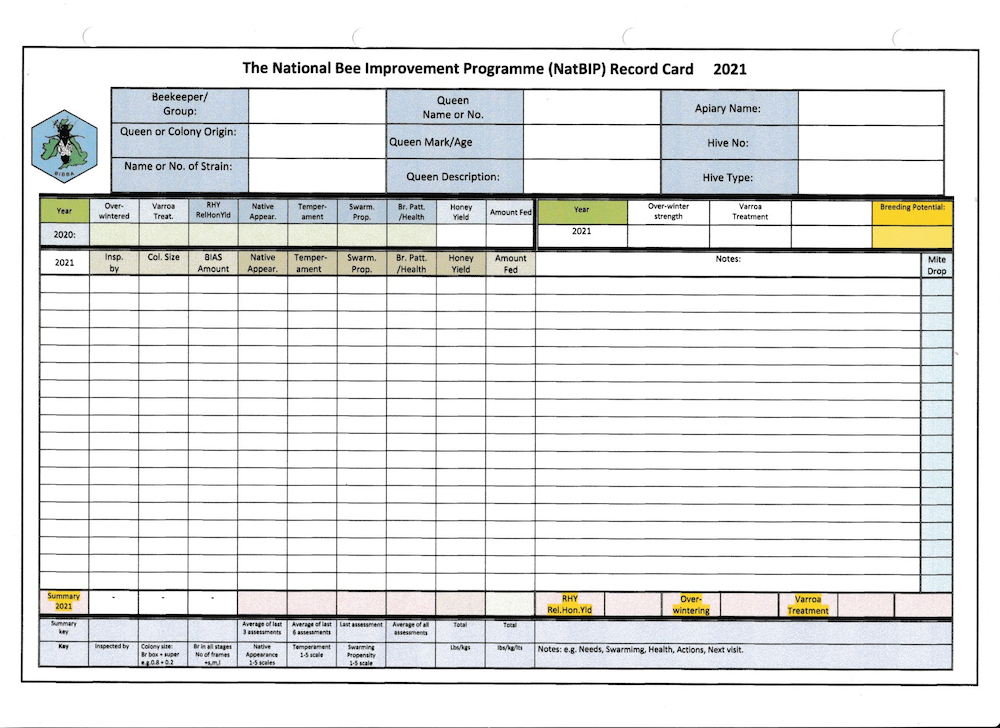 You, or a beekeeper near you, may already have a record card for recording the qualities of the bees.

If not, by all means design your own system, or look at what is offered in Section 4.1 of the NatBIP GUIDE at bibba.com. This can be used as it is, or modified, according to what you or your Group have decided are the desirable qualities that you want in your bees.

The important thing is that you have a card that allows assessment of your colonies at each inspection. In this way a picture will quickly build up as to which colonies have what you want and which colonies, perhaps, need their queens replacing, or the colony at least removed from the ‘breeding area’.

How long before I can select a ‘breeder queen’?

Much has been written about queen rearing but surprisingly little about assessment of colonies and selecting which queen to breed from. What there is, can be off-putting as, often, such a long-winded process is recommended that few of us would ever reach an end-result. Particularly in the first season, one wants to identify a queen worth rearing from quite quickly, so that some new queens can be produced before the season disappears.

A long process of assessment may be more accurate in identifying the most suitable queens but, if necessary, decisions about what to breed from can be made much more quickly. The record card can sort out potential breeder queens very quickly meaning anyone can get young queens produced in their first season.

When you have selected your ‘breeder queen(s)’, the excitement starts as you can then think about rearing offspring. If you have not done any queen rearing before why not start with a simple ‘split’.

Build your colony up on two brood boxes to be split in two when the time is right. The bees will rear queen cells in the queenless brood box. More details on this simple method in Section 5.1 of the NatBIP GUIDE at bibba.com

It provides a really solid overview of many of the queen rearing techniques open to us as beekeepers – plenty of food for thought.

Don’t forget to join us on Facebook and share your journey and ask questions to get the most out of this programme.