Where has NatBIP News been?

It has been a little while since the last issue of NatBIP News. A combination of changing personnel and the busy beekeeping season has resulted in NatBIP News getting a bit neglected, for which I apologise. 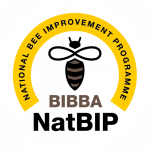 As I hope you all know the National Bee Improvement Programme (NatBIP) was launched by BIBBA in 2021. This was partly in response to the ever-increasing levels of imports of non-native queens, but also, in the belief that there was a need to establish a sustainable system of bee improvement for the first time in our history.

In the long-term we want to see a bee population that is locally adapted and truly sustainable, that is, for example, one that is not reliant on regular chemical treatments to control varroa.

As beekeepers, we must consider the effects of our actions on our local bee populations. Re-queening an aggressive colony with an imported queen, for example, may provide temporary relief from aggression in that colony, but we should also consider that the drones produced by that queen could mate with new queens in that area resulting in further hybridisation of the local population. This hybridisation of our local bees makes bee improvement in our area more difficult, as hybrids do not breed true and, therefore, make selection and improvement a slow and difficult task.

Who can participate in NatBIP? 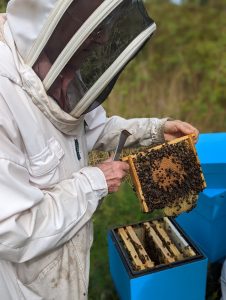 One of the mating nucs at the Special Apiary Project at Sandringham.

NatBIP is appropriate for all beekeepers from the very small-scale to large-scale commercial beekeepers. Everyone can contribute and make a difference. We accept that everyone’s starting position is different, but we start with the bees in our area. The principal rule is that we do not add imported or the offspring of recently imported sub-species as this merely adds to the hybridisation of our local bees.

Once we accept the starting position, the effects of natural and artificial selection mean we are all travelling in the same direction, refining our local populations to get the best out of them, that is, what is best for the bees and best for the beekeeper.

Can we bring queens into our area?

The introduction of native or near-native queens can be used to speed up the process of refining our local bee population. Some may decide to just work with the bees in their area, refining those over a period of time, whilst others will consider that buying in can save a lot of time and effort and help them to get to a more uniform bee more quickly .  A genetically diverse but more uniform strain enables faster progress in our selection and improvement programme, allowing us to develop a bee with the qualities that we want. The important thing to remember is that you shouldn't buy imported queens.

The Basics of Bee Improvement

Next month: Working in Groups: How to work with others to develop our local strain of bee.

On behalf of BIBBA, its members and the craft of beekeeping, we join the nation and others across the world in mourning the sad passing of our much loved and respected Queen, Elizabeth II. Tributes have poured in from around the world, many expressing admiration and praise for the way the Queen skilfully managed some very difficult and turbulent situations during her long reign and the manner in which she did it.