For those actively trying to go down the path of bee improvement, it pays to take a long-term view.

Most people know that beekeeping is littered with triumphs and disasters, probably in equal measures. Despite the ups and downs, I like to aim to do a bit better in the current season than in the last season. If we are making progress, even in small steps, then we can be satisfied, and all the time we are learning from our experiences.

We may be trying to improve our bees from local stock or, perhaps, bringing in stock to help us on our way. This is only likely to be effective and successful if we are trying to go in the same direction
as nature pushes the population, through natural selection. This is why BIBBA puts emphasis on the native strain of honey bee, Apis mellifera mellifera. Beekeepers can argue about the relative merits of different strains and sub-species but ultimately, for bee improvement, we need to go down the easiest route.

If beekeepers could all agree, we could try to impose an exotic strain on to our local bee population, but we would always be pushing against nature’s preferred route and that would make our task all the more difficult. The easiest way to make sustainable progress is to combine the demands of nature with the demands of the beekeeper. This is achieved by avoiding exotic imports and working with local bees.

Many people see the problem with this is the fact that our local bees are often a random mixture of sub-species making them difficult to select and improve. There are two ways of dealing with this (or
a combination of the two), both of which involve avoiding ‘imports’. The first is to keep selecting from the bees that perform well, according to your criteria, in your area. Natural selection and ‘beekeeper selection’ (that is, artificial selection) will allow you to develop a local strain from the bees in your area. If imports into the area are avoided, the resulting honey bee will likely tend towards the native sub-species but can probably be best described as a ‘near-native’.

The second method is to bring in stock which are genetically close to our original native sub-species and multiply up and establish a population from which selection and improvement can be carried
out. The thinking behind this route is that it may speed up the whole improvement process, perhaps saving years of effort. Honey bees, however, with the multiple mating of queens will tend to outcross with drones from the area and much effort will be required to select and maintain the strain.

Both approaches, or a combination of the two, will, I believe, tend towards the same end result, which will be a near-native local bee. The fly in the ointment is, of course, exotic imports which bring new untested genes into the area, setting back the process of developing a truly locally adapted bee.

God Save the Queen!

So, June is when we get into our queen rearing proper – excitement and disappointment abound, but our plucky NatBIP News volunteers are a persistent bunch!

Phil – our beginner – has relied on the natural method of queen rearing, using the bees swarming instinct to produce new queens. By performing an artificial swarm, he was able to harvest early swarm cells, manipulate them and the parent colony to provide potential new queens.  This really is the easiest, and least complex method of queen rearing, and perfectly suitable to anyone that wishes to rear a few of their own queen  to replace existing or give away to friends etc.

Phil says “After carrying out a split, a week later all was well in both the parent colony and the split – the split having raised more queen cells.  I destroyed all of the Queen Cells bar one – I’m expecting a Virgin Queen any day now.” Good effort Phil and very rewarding.

Next month we will hear more from Alison and her apiary. But for this month, it’s time to hear from the children of Ashbrow Primary School in Yorkshire. Yvonne Kilvington is leading a merry and enthusiastic team of young beekeepers and this is the account of their activity to date.

Since we last checked in, it seems a lot has happened. Some good news and some not so good. 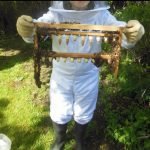 We reported in our last update that it looked like we had 6 new queens on the way. It actually turned out that out of the 20 cells that we set up we only had 4 cells sealed. We weren’t sure if it was something we had done wrong or if there was another reason – we’re hoping Jo Widdecomb can give us some guidance on this.

Needless to say, the children were really pleased with the 4 queen cells that were eventually sealed and felt quite proud of their achievements.

The next job was to set up the Apideas. We picked a nice warm day and had already chosen the colony from which the donor bees would be taken from. Our Apideas were already loaded with fondant in the feeder. 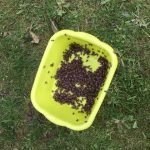 We used an old washing up bowl and made a scoop from a plastic milk bottle cut into shape. The Apideas were laid out in front of the donor colony and with washing up bowl and scoop at the ready we selected the young nurse bees. The children found it amusing that we needed a cup full of bees for each Apidea.

We shook the frames lightly to remove the flying bees and made sure we had the right bees for the job.

After shaking them in to the bowl we lightly sprayed them with water to prevent the bees from flying away. After careful scooping, the bees they were put into the Apideas and quickly closed up.

We kept the Aideas in our bee shed for 3 days in a dark corner and made sure we sprayed them twice a day to prevent them from overheating. They really did make a roaring and crackling noise. 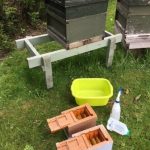 Some of the children were worried that the bees would die because they couldn’t get out but I explained that they would be busy building new comb and as long as we made sure they were sprayed with water and kept cool they would be ok.

We had timed the stocking of our Apideas in a way that would allow us to introduce a sealed queen cell two days before the queen was due to emerge.

We weren’t sure where to site our Apideas. We didn’t have an isolated apiary to take them to so we placed them in our school apiary as far away from our main colonies as we could. We sited them on the edge of a small wooded area so they would not be in full sun, but still get dappled light so as to remain cool. 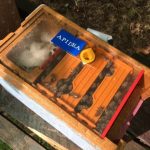 The exciting part was introducing the queen cell. The photo below shows one of our Apideas with the queen cell inserted through the small hole in the perspex crown board. The nurse bees looked well and had drawn a lot of new comb. They seemed excited to receive the cell and took interest in it straight away. All our fingers were crossed in the hope that the new queen would emerge healthy and would be mated successfully....and so the wait began. Oh! And we didn’t forget to leave a queen cell in the cell raiser colony for them.

It was really useful to keep a detailed record of our queen lifecycle. We used the record card from BIBBA. If our predictions were accurate, we were looking to see a new queen emerging in a couple of days’ time.

We think the queens emerged a day early. It was at the weekend when they decided to emerge so it wasn’t until the following Monday that we were able to check them. After seeing the empty queen cells and the little trap doors where the queens had nibbled their way out, they were left in peace to go out and mate.

Now here’s the not so good news. Our breeder queen decided to disappear. We really don’t know why. So that was disappointing, but we decided that we would use one of the Apideas to unite with the colony rather than them raising a new queen cell. 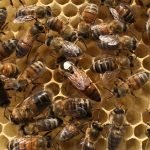 After what seemed a long wait, we decided to check the apideas and see if the queens had started to lay. We did notice that some were quick off the mark whilst others were a little slow to start but we can now say that all our new queens are successfully mated and laying well.

Here’s a photo of one of them. She looks lovely. In our next report we will let you all know how the queens are doing.

This may be one for the scientists! Perhaps we would expect the bees to know better, as they are likely to detect subtle differences that the beekeeper cannot hope to be aware of. If we rely on natural queen cells for our queen production (swarm cells, supersedure cells or emergency cells) then we are, in fact, leaving it to the bees to choose.

One, often cited, problem with this is that reliance on swarm cells may result in us inadvertently selecting bees that favour swarmy behaviour. Strains, for example, that are not prone to swarming will produce few cells and therefore will rarely get selected.

There are queen rearing methods which allow the bees to choose which eggs or larvae to rear queens from such as the Miller Method or a method where a brood frame with eggs is laid horizontally over a queenless colony, sometimes known as the Hopkins Method. Some beekeepers deliberately use these methods to allow the bees to select their own eggs or larvae.

The fact is, though, that thousands of queens are reared every year by beekeepers grafting larvae of their choice and seemingly excellent queens can result. Presumably if there was anything seriously
wrong with the larva the bees would not produce a queen. Also worker larvae are identical to queen larvae (the difference is the diet) so a good worker larva should be no different to a good queen larva.