The National Bee Improvement Programme (NatBIP) aims to reset the widely accepted approach to bee improvement which, for many, consists in buying in new queens to improve the quality of their bees. Unfortunately, bringing in queens of exotic sub-species at best only produces a temporary improvement and, on the down-side, will result in the production of incompatible* drones in the area. The net result, over time, is an increase in the number of randomly hybridised colonies and, therefore, increased difficulty in achieving consistency in our selection and improvement programmes. 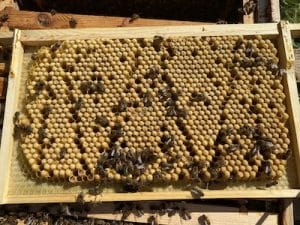 Rather than just focussing on the quality of individual colonies, we also need to consider the effects that our actions have on the local bee population. We rely on the local population as the source of drones for any new queens that we produce.  A sustainable system of bee improvement depends on increasing the supply of ‘good’ drones, and not the reverse.

Influencing the local population in a good way depends on reducing the level of hybridisation, that is, the mixing of the sub-species, in the local bees. Anyone who has tried growing seeds saved from an F1 hybrid variety will know that the resulting plants vary enormously from the parent variety. Similarly, in bees, to get consistency we need to move away from breeding from hybridised stock, whilst maintaining genetic diversity in the population.

Unfortunately most of us are subject to a hybridised local bee population, to a lesser or greater extent, and it is this that we want to reduce. In areas where we stop adding to the problem through further exotic imports, hybridisation will tend to diminish. The effects of natural selection cause unsuitable genes to gradually drop out of the population through the process of ‘survival of the fittest’. This process can be speeded up through selections made by the beekeeper, perhaps, for example, not breeding from bees most obviously having a strong influence of foreign sub-species. Natural and artificial selection work well together and represent the partnership between the bee and the beekeeper and result in an improved drone population.

How can small-scale beekeepers have any bearing on the local drone populations?

General principles get us moving in the right direction, but small-scale beekeepers may feel that they have little chance of influencing things for the better. If, for example, our beekeeping neighbours are keen on using exotic imports, what hope is there of us achieving good matings for our queens?

One thing to bear in mind, if we are aiming for native or near-native bees, is that nature does seem to favour our native subspecies, Apis mellifera mellifera (Amm). Relatively pure strains of Amm seem to have survived in many areas despite little or no attention being given to the strain in the past. Even where a strong presence of imported bees is apparent, the native strain can be well represented in the gene pool and may just need a bit of work selecting stock to bring the genes to the fore again.

One of the likeliest explanations for its survival is that matings can take place in slightly cooler conditions than for other sub-species. Also, survival rates for native bees are probably higher than for exotic sub-species.

In summary, small-scale beekeepers can improve things in three ways, (i) by refraining from using incompatible exotic imports, and (ii) by increasing the awareness of the problem of imports amongst beekeepers and (iii) by supporting a more sustainable approach through the National Bee Improvement Programme (NatBIP).

Achieving good matings for our queens

As small-scale beekeepers, we can increase our influence by working with others, as discussed in NatBIP News a couple of months ago. We can join with like-minded beekeepers in our area and set up and participate in a bee improvement group. This can help considerably in improving the local bee population and the supply of good drones. By working with others, we will have more colonies to select our breeder queens from, be able to produce more new queens and have more colonies producing compatible drones.

Even if you happen to be next to a beekeeper who regularly imports bees, your group may be able to identify, or establish. an area that can be flooded with ‘good’ drones. Instead of being subject to difficulties in your area, you may be able to take nucs and mini-nucs to a more favourable mating apiary to get the queens mated with more compatible drones.

* ‘Incompatible’ drones are ones that increase the hybridisation of the sub-species, produce negative characteristics in offspring (e.g swarminess, aggressiveness, etc.) and future generations do not breed true, that is, offspring are very variable and do not resemble their parents.

Please get in touch with Jo Widdicombe if you interested in this aspect of NatBIP.

By encouraging more beekeepers to support NatBIP, achieving good results will become easier and faster, and we can build a more long-term and sustainable approach to our beekeeping.